The Federal Reserve: The Facts and Myths Explained in Plain English

Perhaps the most misunderstood institution in the United States is the Federal Reserve (a.k.a, the Fed). It’s both part of the federal government, and it’s not. To some, it’s a vast conspiracy orchestrated by billionaires and shadow organizations. Others watch for news from the Fed as if their livelihoods depended on it, and for some, they do.

What is the Federal Reserve?

In short, the Federal Reserve definition is the central banking system of the United States. It started as a response to the Bank Panic of 1907. When similar to the Great Depression over 20 years later, the stock exchange lost over half its value. Shortly after, there was panic and a run on the banks.

Fortunately, J.P. Morgan and other bankers came to the rescue of the banking industry. The Fed’s inception began in 1910 when a group of six men met in secret at the Jekyll Club to discuss their concerns about the instability of the banking system. They penned legislation that would eventually lead to the formation of the Fed.

Given today’s political climate, it’s surprising to know that the men, who were in the banking and finance industries, lobbied for more regulation. They also wanted to be able to conduct business overseas.

What does the Federal Reserve do?

Promotes the stability of the financial system and seeks to minimize and contain systemic risks through active monitoring and engagement in the U.S. and abroad;

Promotes the safety and soundness of individual financial institutions and monitors their impact on the financial system as a whole;

Fosters payment and settlement system safety and efficiency through services to the banking industry and the U.S. government that facilitate U.S.-dollar transactions and payments; and

Promotes consumer protection and community development through consumer-focused supervision and examination, research and analysis of emerging consumer issues and trends, community economic development activities, and the administration of consumer laws and regulations. 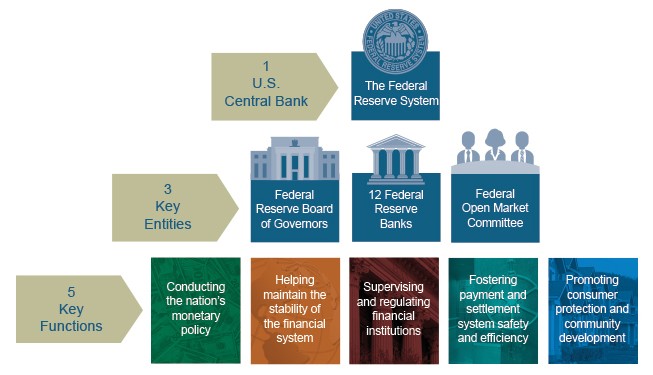 Is the Federal Reserve System a part of the government?

Most people believe the Fed is part of the government, for pretty good reasons. It was established by an act of Congress. The president of the United States appoints the Board of Governor members, and as with federal judges and cabinet members, the Senate must approve them.  The board members serve a 14-year term. The president also appoints the chair and vice chair of the board. Congress can also amend the Federal Reserve Act. That’s where government control of the Fed ends, though.

The Fed is an independent central bank. Neither the president or any other member of the executive or legislative branch has any say in its operations. The government doesn’t finance the Fed. Because the term is 14 years, board members span multiple presidential and congressional terms, so it’s non-partisan.

Who runs the Federal Reserve Bank?

The Board of Governors has the primary job of running the Federal Reserve, but the Fed is also made up of 12 regional Reserve Banks, each of which has their own board. The 12 regional banks are broken up into four groups, including Cleveland and Chicago; Minneapolis, Kansas City, and San Francisco; Boston, Philadelphia, and Richmond; Atlanta, St. Louis, and Dallas. New York is on its own. There is also the Federal Open Market Committee, which consists of Federal Reserve Governors and Federal Reserve Bank presidents.

Policies and decisions are voted on by the Board of Governors, the New York regional bank president, and one president from each of the other groups of regional banks.

Where are the Federal Reserve Banks?

What is the Federal Reserve Act?

The Federal Reserve Act passed in 1913 and has been amended several times since then. Its purpose was to establish a centralized, regulated banking system throughout the United States.

Criticisms of the Federal Reserve Act

How the Federal Reserve directly affects the economy

The Federal Reserve’s jobs are to issue (not print) Federal Reserve notes (the U.S. paper currency), adjust the rates that banks can charge borrowers, and to trade U.S. treasuries. The Fed cuts interest rates to consumer spending and economic growth, and they raise interest rates when inflation becomes a factor.

According to the Federal Reserve website, manipulation of the interest rates “triggers a chain of events that affect other short-term interest rates, foreign exchange rates, long-term interest rates, the amount of money and credit, and, ultimately, a range of economic variables including employment, output and prices of goods and services.”

The Federal Reserve and Mortgage Rates

The Federal Reserve has very little to do with mortgage rates. Mortgage lenders may watch the Fed for trends, but they choose interest rates independently. There are many examples of mortgage rates rising after the Fed lowers the rate, and vice versa.

Is the Federal Reserve an Evil Conspiracy?

Many conservatives and libertarians believe that the Federal Reserve is part of a larger conspiracy involving the Rothschild family. One book, called the Creature from Jekyll Island, by conspiracy theorist G. Edward Griffin, referred to the 1910 meeting that eventually spawned the Fed. The book paints a frightening picture of an organization that “has become an accomplice in the support of totalitarian regimes throughout the world.” He called the Fed an “instrument of totalitarianism” and called for its abolition.

Here’s one passage from the book, courtesy of the Daily Beast:

“There are few historians who would challenge the fact that the funding of World War I, World War II, the Korean War, and the Vietnam War was accomplished by the Mandrake Mechanism through the Federal Reserve System,” Griffin writes. “An overview of all wars since the establishment of the Bank of England in 1694 suggests that most of them would have been greatly reduced in severity, or perhaps not even fought at all, without fiat money. “(The Fed) is the ability of governments to acquire money without direct taxation that makes modern warfare possible, and a central bank has become the preferred method of accomplishing that.”

“We theorized a strategy, dubbed the Rothschild Formula, in which the world’s money cabal deliberately encourages war as a means of stimulating the profitable production of armaments and of keeping nations perpetually in debt,” Griffin warns. “This is not profit seeking, it is genocide. It is not a trivial matter, therefore, to inquire into the possibility that our elected and non-elected leaders are, in fact, implementing the Rothschild Formula today.”

Many say the Rothschild family controls the Fed

They incorrectly claim that they own 80 percent of the world’s wealth. The truth about the Rothschilds is that they are still very wealthy, but they are spread out, not centralized. There is a Rothschild Group, but it is only worth about half a billion dollars. Only one Rothschild is even considered a billionaire.

Some say the Illuminati is involved, and others say Catholic Jesuits are part of the conspiracy.

A more substantial portion of the population cry for the Fed to undergo audits. It is, in truth, audited every year. A more legitimate criticism comes from the fact that its 12 banks are not subject to the same type of audits.

If you are interested in reading more conspiracy theories, you only need to search “Federal Reserve” on YouTube. Most, if not all, have been thoroughly debunked, though.

However, this isn’t to diminish the power of the Fed. Yes, they have a lot of influence over how much money costs. But they are just one cog in the wheel that keeps our country moving.